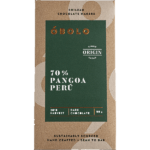 Mark Gerrits travelled the world until he fell in love with the Amazon. He ended up working in cacao communities in Ecuador and discovered the wonder of making chocolate. The idea of ÓBOLO was born and in 2013 Mark made his first batch of chocolate. Two years later the factory opened, still the only one in Chile. Spare a thought for South America right now. Now in lock-down, the team is avoiding public transport and their head chocolate maker is enduring an uphill 1 hour bike ride to work (he has a shower before starting) – at least it’d be fun getting home!

ÓBOLO means a gift or a small contribution in Spanish,