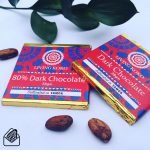 Phoebe Preuss and partners founded Living Koko from a desire to reconnect with and support local people. Phoebe’s grandfather worked in the Samoan cacao industry early last century. He created the strain LAFI7 which became famous & widely used across the country. She is now reconnecting with her grandfather’s community.

Glen Reiss was another of the founding partners. He survived the 2013 PNG Black Cat Trail attack and has been dedicated to supporting the families of the porters who lost their lives. Glen manages the PNG work and fundraising.