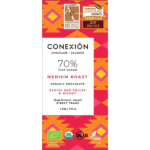 Growing up on the coast of Ecuador, Jenny Samaniego remembers playing in and around magical cacao trees. When living in the US years later, she realised there was a need to connect the farmers back home with emerging chocolate makers – she decided to bridge the gap.

She eventually tried making her own chocolate and was hooked. Moving back to Ecuador in 2016 she started Conexión and won her first awards a year later.

Jenny is coordinator of the Heirloom Cacao Preservation project - ensuring special cacao all over the world lives on forever.