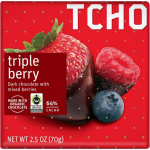 TCHO aims to make the best chocolate in the world, and do it in a way that actually makes the world a better place. One way they do this is to roast many of their beans at origin, keeping more of the value chain with the people who grow the cocoa.

In true Silicon Valley style, TCHO was founded in 2005 with backing from the founders of WIRED magazine, and then in 2013 a Connecticut investment company bought a majority stake. And in breaking news, that majority stake has just been sold to the Japanese company Ezaki Glico (the company behind Poky sticks!).

TCHO are creating a style of chocolate they call ‘New American Chocolate’ specifically for the American palate.